Did you vote yesterday in the General Election? I did. But I nearly didn’t. Until a few days ago, I had no intention to vote and I’ll tell you why. I’m completely in agreement with those people that say “if you don’t vote, then you can’t complain” but honestly – what difference does it really make? When I say that… I don’t mean what difference does my vote make, but instead – what difference does it make who’s in power? Conservative, Liberal Democrat, Labour – which is best? I know most people have their own opinion on this and that’s absolutely fine but mine? Well I think they’re all as bad as each other.

One party will increase taxes but provide more for benefits. One party will cut spending on education, but will give more to those seeking employment. These aren’t actually policies obviously, but they’re just an example. For every good thing a party might do, there are loads of bad things. There is no perfect party and whoever gets in, there will be both good and bad come of it. Because of this, I had no intention of voting. It was bound to be one of the three main parties that go in (likely Conservative or maybe a coalition again) and so why bother voting?

However… the more I thought about it, the more I realised that by not voting, I risked parties that I didn’t like, getting more power. Now I don’t want to make my blog a political war ground, but I will say that I despise UKIP and everything they stand for. Sure they have one or two good ideas, but for the most part I hate everything about them. What if by not voting, along with lots of other people who feel the same, I actually enable someone like UKIP to get an extra seat. So in the end, I went to vote. I even took the girls with me. I am not a particularly political person, in fact for the most part I tend to avoid the news at all. As such, I don’t really have a wide knowledge of what every party stands for. However Megan and I did have a discussion about the voting, because she’d been doing about it at school. With my limited knowledge, I explained to both girls, the point of voting and the effected outcome. They came with me into the polling booth and helped me decide where to place my vote.

As the votes are coming in this morning, it looks like Conservative will be back in power for another 5 years. I didn’t vote for them, but as I said before, I’m not entirely sure I care. This morning, everyone is pretty stressed over the outcomes – a lot of opinions are exploding all over the internet. Because of that I was definitely amused to see these pictures published by MyVoucherCodes, as featured on Superbious. They show what the kids of the UK Party Leaders would look like, if they were to have “coalition kids”. 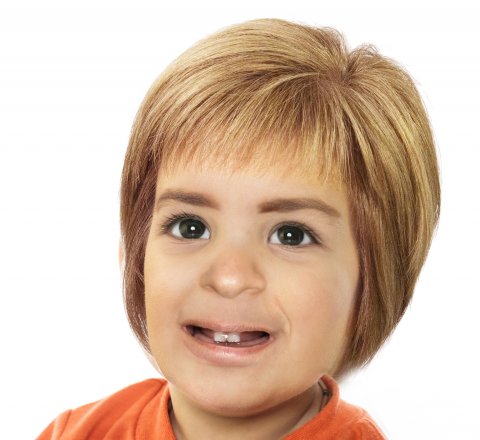 I definitely think, as the results come in this morning, everyone needs to take a step back and a deep breath. Sure its the future of the country and perhaps it didn’t go the way you hoped. But ultimately life goes on and really you gotta keep on smiling. Check out the rest of the coalition kid pictures and have a giggle. There are a lot worse things that could happen today, than the wrong political party getting into power!